The Resistance Is Grinding

I often mumble in my sleep. Sometimes I talk. Occasionally I scream.

But grinding my teeth? This is a new one.

My wife, Jackie, has started tapping me awake when she hears it.

I exhale. Break briefly from the nails-on-chalkboard like sound. And then, usually, start back up again.

I’ve been doing it ever since the election.

It appears the anxiety I feel during the day isn’t interested in taking time off during the night.

Relief seems so far away. Especially as the new presidential administration takes its efforts at total disruption to perhaps the darkest, ugliest, and scariest place yet: An executive order to halt admission of refugees and citizens of seven Muslim-majority countries. (Unless you happen to be Christian. Then you’re given priority to enter. Because you know. WWJD and all that.)

It echoes back to some of our worst days as a country. Haven’t we learned from our mistakes? Apparently not.

In Cincinnati, someone recently distributed fliers around a Muslim woman’s neighborhood falsely accusing her of terrorism. The flier has her name, photo, and address on it. 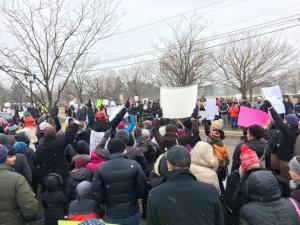 In just two days, a rally was organized in the woman’s community to denounce the hateful act and show support for her, her family, and people like her.

I got the alert an hour before it was set to begin and immediately got in the car.

When I showed up and walked toward the group gathering on the street, a woman wearing a hijab walked up and greeted me. She offered a piece of chocolate from a basket of candy she was carrying. I took a truffle. She smiled. We hugged.

Standing along the street among signs, car horns, and chanting, two men walked up and offered me a slice of pizza from a stack of boxes they were carrying.

“We just wanted to say thanks for being here for us.”

A little later another woman offered me coffee.

Eventually, Rawd, the woman who was the target of the hateful flier, the reason so many had gathered to show their disgust, took to a megaphone.

Hundreds of her neighbors cheered.

It began to snow. We bundled up tighter. Stood closer together. And for an hour in Cincinnati the resistance was strong.

Plus, on a national level, the ACLU is fighting back. And winning. Droves of protestors are rallying at international airports across the country. Even bipartisan outrage is making headlines in Washington.