Dear Kids, This is Why Dad Voted for Hillary Clinton

I clearly remember my grandmother telling me stories about the years she and my grandfather lived in Alabama. It was during the Civil Rights movement. (The first one.)

She was from Indiana. He was from Kentucky. Neither state free of racism or hate. That’s for sure. But quite a bit different than the deeply southern, small Alabama town near Anniston where they moved for work.

Back then, my grandfather worked in Human Resources and was in charge of hiring at a large factory. He didn’t see color when it came to adding staff to the company. But in the 1950s, in a town just 100-something miles from the now infamous Selma, Alabama — this was controversial, to say the least.

I remember my grandmother saying, without a beat, “Why would he?”

No doubt it was a tumultuous time, and even my grandparents likely made their own missteps along the way. No excuses for that. But how glad I am for their example. Glad to hear my grandmother tell me how she tried. How my grandfather tried. How they both tried their best to land on the right side of an ugly fight.

I often wonder if one day my future children will ask me about the Election of 2016. This may very well be the most motivating factor for me when it comes to my staunch support of Hillary Clinton.

I want to be able to look my child in the eyes and say I did everything I possibly could to make sure she was elected president.

I want to say: I voted and fought for Hillary Clinton, not because I thought she was the lesser of two evils, but because I knew it was the right thing to do. 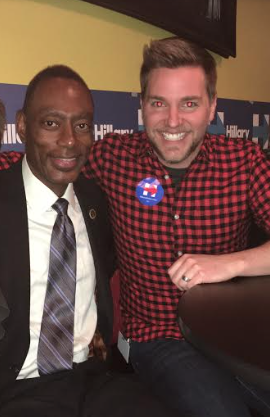 I’ll say I volunteered. Collected signatures. Knocked on doors. Made phone calls. Attended rallies and watch parties. I donated when I could. Proudly put up a yard sign. A banner. A bumper sticker.  I shared way too much on Facebook and Twitter and lunch breaks. I wrote this blog post, even though I knew it was overkill.

I did what I could, when I could.

I don’t know if any of it changed any minds. Doubtful. But I’ll say to them: I couldn’t sit back. I could not and would not be silent.

I’ll tell them I was in her corner from the beginning. I’ll say I voted for her because she was smart. Razor sharp. Full of grit. She was quick on her feet — and had one of the most impressive resumes our country had ever seen.

I’ll explain to them how, back when mom and dad were young, it wasn’t easy for a woman to successfully rise to power. And although they come from a long line of very strong women — there was, in fact, a glass ceiling. Some people didn’t want to admit that it existed back then. But Hillary Clinton knew it was real. And she was one of the strongest, toughest, hardest hammers to hit it and shatter it for good.

I’ll tell them how much she cared. How she had a legitimate concern for our world and everyone in it. I’ll explain that many people questioned her motives — but at the end of the day, she spent her entire life fighting for the well-being of all people. And she never, ever gave up.

It’s not as noteworthy a fight as the one my grandparents waged. But electing Hillary Clinton president right now feels like one of the most important things I’ll ever do. Maybe that’s silly and unnecessarily dramatic. Maybe it’s not.

I just hope my kids can say: Dad was on the right side of history. And he did every damned thing he could.

(Damned, depending on age, of course.)

2 thoughts on “Dear Kids, This is Why Dad Voted for Hillary Clinton”