She puts on her dress, applies her makeup and fixes her hair.

She’s done it umpteen times before.

But this isn’t a Sunday morning before church, or some other routine occasion. She’ll need a special suit jacket to wear over top.

One of her favorites, still on the hanger, is lying across the bed. It’s checkered, like a table cloth, but delicate and fits her just right.

She pulls it over her five-foot, four-inch frame and buttons the over-sized white buttons along the front.

She pushes her earrings through her ears. They look like clusters of pearls. But they’re not. They match the white beaded necklace that’s sitting high and tight around her neck.

Standing in front of the mirror, she takes a look at herself. Not bad for a 58-year-old housewife from tiny ole Tell City, Indiana.

The big, round glasses covering her blue eyes make her look older than she is. But she plans to keep them on when they take her photo today.

Posing for a photo is nothing she’d ever choose to do on her own. But she needs a photo to get a passport. She needs the passport for her trip. Her trip around the world.

She takes a deep breath and walks out of the bedroom. She may be nervous inside – but she’ll make sure when the camera flashes no one can tell it.

Eva Wilcher, my great-grandmother, won a trip around the world in 1953. She was a mother of nine. Five of her six sons had been, or were currently, serving in the military at the time.

Her 23-year-old son, Marshall, stationed in France, entered her in a contest for the trip. He was her second youngest. Out of all the entries, she won. The trip was in cooperation with the Department of Defense and was sponsored by The Wheel of Fortune and Parade Magazine.

She was sent to represent all mothers whose sons were in service – dubbed the “Armed Forces Mother.”

My great-grandmother in flight over the Pacific Ocean on a trip around the world.

“A little lady from the Midwest has a wish come true,” one newspaper wrote.

“A world hop with Grandma,” is how another headline put it.

There weren’t a whole lot of women flying around the world in 1953. In fact, in the family section of her passport, the template read: “The bearer is accompanied by his wife, __________ (fill in the blank.)”

Eva crossed that part out. Three Xs. No need to replace “his” with “her” or “wife” with “husband.” She’d be making this trip by herself.

The stamps inside tell part of her journey: Japan. Israel. France. Italy. Denmark. The Philippines. A three-week trip beginning with a flight to Honolulu. Several passport stamps were needed to get into Hawaii back then. It would be six more years before it became a U.S. state. But once she was there, the natives decked her with leis – too many to count.

Hanging a wreath at Pearl Harbor.

She laid a wreath of flowers on what was once the deck of the USS Arizona in Pearl Harbor. She posed for another photo. This one solemn.

Later, she changed into a pair of lace-up tennis shoes and walked out onto the beach. But she couldn’t stop thinking of the dead. The more than 1,000 Americans. Many still entombed in their ship under the water.

In Waikiki, a dance teacher tried to show her how to hula. They talked her into putting on a grass skirt. She swayed this way and that way, paying close attention to the instructor the whole time. A bit embarrassed, but laughing, she gave it her best effort before eventually giving up. She told the teacher she’d accept any challenge in the kitchen. Skilled cook? Yes. Hula girl? No.

At a restaurant in Tokyo, Japan.

Everything she did was new and different. The adventure was more than she could have imagined.

In Tokyo, she went shopping for souvenirs. She bought a set of small hand-painted ashtrays for my grandmother. They remain with me today.

She ate at a traditional Japanese restaurant where she had to take her shoes off first.

“The customs are so different than ours,” she said. “I could never get used to it.”

She ate tempura, octopus and eel. But maybe the most surprising, she said, was a fried dandelion leaf. 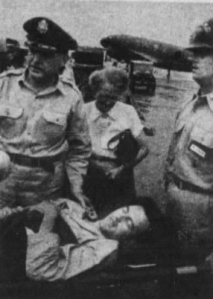 While she was in Tokyo, the first prisoners of war were returned from Korea. She stood next to them as they came off planes. Some, too exhausted to stand, were rolled out on stretchers.

They told her they felt so far away from their families. They missed the people they loved.

She was a good mom at home. She could be a good mom there. And that’s what she did. Comforted them like sons of her own. Standing in for all those mothers who couldn’t be there.

The Department of Defense asked her to visit military camps wherever she went. Groups awaited her arrival. In Naples, she met with service men and women who were based at NATO headquarters. 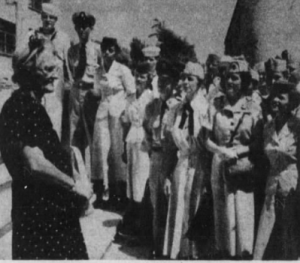 She took her role as the American Mother seriously. She wore a hat and gloves for the occasion. Short sleeves, though, because it was hot. Many soldiers told her to ask people back home to write to them as much as possible. It helps morale, they said. It keeps them strong, they said. She promised she would. And she did. Making sure it got back to the people at Parade Magazine.

Her longest flight was from Tokyo to Rome. 40 hours, all told. But the plane couldn’t hold enough fuel for the entire trip, so it made a couple stops to gas up. They landed in Thailand and in India. She said goodbye to her Scandinavian flight crew in Bangkok and welcomed a new crew for her trip into Italy’s capital city.

She loved Rome and Copenhagen. She told a reporter she was impressed with how beautiful and well-dressed Italian women were.

“They seem to have a lot more leisure time than American women. They were sitting in cafes when we would be home cooking,” she laughed. 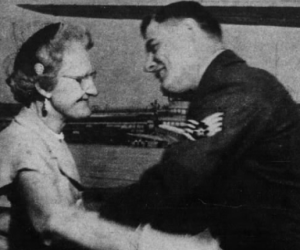 The highlight of her trip came in Paris.

A familiar face was waiting for her at Orly Field Airbase. Her son, Marshall. The one who was stationed there. The one who wrote the contest-winning letter. They went shopping, saw the sights, and visited with more troops, generals and commanders.

She was never in one place very long. The stops were quick. The schedules were hectic. She lost four pounds and plenty of sleep.

When she got back there were newspaper interviews, radio shows and TV spots.

“I’ve had my picture taken so much and people are still taking pictures,” she told CBS in New York.

It was her last stop before heading back to Indiana.

Back home, she starts to unpack.

She pulls her dresses out of the suitcases and hangs them in the closet. Everything is back where it belongs.

She’s seen so much. Felt so much. Learned so much.

She guesses some people might get the feeling the world is small after a trip like hers. But she’s impressed. Impressed with how big it is.

Don’t get her wrong. She is happy to be back. And happy for her 58 years at home, raising the big, fine family she is proud to call hers. She couldn’t have done that without being here. Being home. Being where she is supposed to be.

But she’d go back again, if someone offered.

She would love to go back.

5 thoughts on “Eva Sees The World”