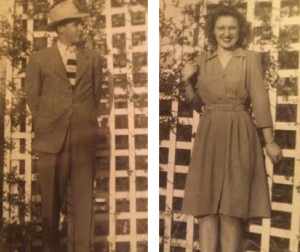 My grandmother passed away Wednesday, April 23, 2014. In September 2013, I had the privilege of briefly interviewing her about her life. This is one of her stories.

As the men in this country left for World War II, my grandmother found herself in line applying for a factory job. Not the first choice for a young lady. Not even one as tough as my grandmother. But her mother insisted the country needed her. Still, my grandmother wasn’t exactly convinced.

“I went just madder than a hornet,” she said. “I just didn’t know if I could work in a factory and do all that welding and hard work.”

The Ken-Rad factory sat walking distance from her family’s home in Huntingburg, Indiana. The company made electric tubes for radios and light bulbs. It would later become General Electric. In addition to being a major supplier of war materials, the company provided the light bulbs for the first Major League Baseball game played at night.

My grandmother was hired at the factory on the spot. The 17th woman to join the plant. She was asked to start the next day.

“I got up and turned around to go and the lady said, ‘I would advise you not to wear those bracelets tomorrow.'”

On her first day at work she was assigned to a unit with seven other women. Each of them had different tasks on the assembly line. The woman seated next to my grandmother was in charge of tallying the materials, filling out paperwork and other record-keeping tasks. However, my grandmother quickly noticed there was a problem.

“She couldn’t count. She couldn’t do math. Couldn’t hardly even write,” she said. “I ended up having to do her job and mine. I was sad for her.”

My grandmother was eventually promoted to forelady – the highest position for a woman in the plant.

“I didn’t much want to. But I had to. I was very, very unhappy about it all,” she said.

But her attitude changed when she learned she’d be working along side the new general foreman.

He was from Owensboro, Kentucky. One of the few young men kept from the war to run the factory. After his success at the plant in Kentucky, he was transferred to my grandmother’s plant in Indiana to help.

“I can remember when he walked in that first day. I thought he was the best looking thing. I fell in love with him just right away. It was almost instant,” she said.

But he was a young divorcee. Something her mother was not pleased about.

“Nothing happened right away.”

Nonetheless, as the factory’s foreman and forelady, the two had to work closely together. Many of the employees became friends and began regularly going out to eat together.

“Then one night when work was about over, he came by there and said, ‘Nobody can go tonight.’ So we weren’t going to go. Then he said, ‘Would you go to the movie with me?’ and I said, ‘I don’t think so.'”

She eventually let him take her out.

“I just loved the way he wore a hat.”

Their favorite dates were to Jasper, Indiana, about 10 miles away, where there was a theater.

“We went to so many movies because there weren’t a lot of places to go,” she said. “But one night we had been to a movie and we were starting home and he turned onto this other street.”

He had drinks in the back seat and proceeded to the popular spot in town.

“We went out there and were sitting there talking and falling in love more all the time,” she said.

Later that night, as he stopped outside her house, just before she got out of the car, he looked at her and said, “I don’t know about you, but I’m really serious.”

The next morning she told her mom.